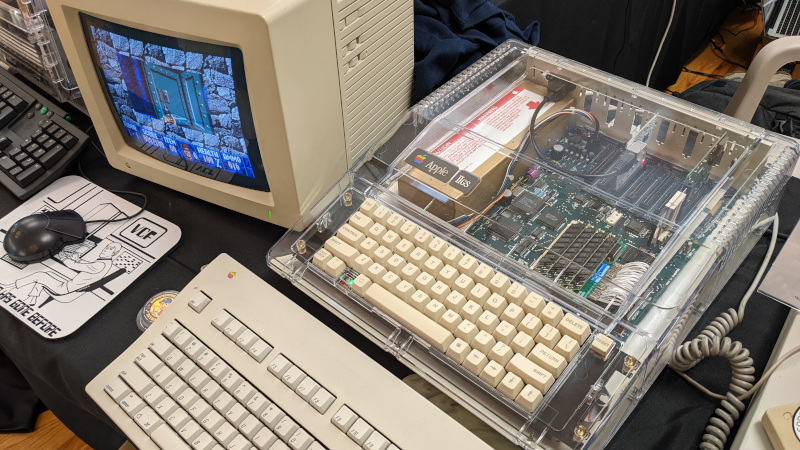 When I arrived at the InfoAge Science and History Museum for this year’s Vintage Computer Festival East, I fully expected it to be a reduced event compared to last year. After all, how could it not? Due to the schedule getting shifted around by COVID, show runner Jeffrey Brace and his team had just six months to put together an event that usually gets planned over the course of an entire year. With such a truncated preparation time, they more than deserved a little slack.

But as anyone who attended VCF East 2022 can attest, they didn’t need it. Not only did the event meet the high expectations set by last year’s Festival, it managed to exceed them. There were more workshops, more talks, more vendors, more consignment rooms, more live streams, more…well, everything. This year’s program even got a splash of glossy color compared to the grayscale handout attendees received in October. It was, by any metric you care to use, better than ever.

It does however leave me in somewhat on an unenviable position. As we’ve learned during the pandemic, a virtual representation of an event as extensive as VCF can give you a taste of what’s offered, but all the nuance is lost. Looking at pictures of somebody’s passion project can’t compare to actually meeting the person and seeing that glint of pride in their eye as they walk you through all the details.

So bear that in mind through this rundown of some of the projects that caught my eye. This isn’t  a “best of” list, and the Festival is certainly not a competition. But each attendee will invariably come away with their own handful of favorite memories, so I’ll document mine here. If you’d like to make your own memories, I’d strongly suggest making the trek out to the Jersey Shore come April 2023 for the next Vintage Computer Festival East.

A disturbing number of people believe that portable computing started in 2007 when Apple unveiled the first iPhone, but those who’ve been following the world of tech a bit closer know there’s a long line of organizers, PDAs, palmtops, tablets, and other oddball gadgets that stretch back to the very earliest days of personal computing. Dave Shevett brought along some choice selections from his incredible personal collection of handheld computing devices that ranged from a Curta mechanical calculator to iconic stalwarts like the Palm Pilot and BlackBerry.

At an event packed with as much rare and expensive hardware as VCF, you should generally keep your hands to yourself. But in this case, Dave invited attendees to pick up and play with the devices on display to get a feel for what using them might have been like. Well, not all of them. I didn’t see him hand the Curta off to the random passerby, but there’s only so much damage you can do to a Sony CLIE or a TRS-80 Model 100.

I’ve learned over the years that “vintage computing” means something different depending on who you ask. For some, it’s the era of early desktops like the Commodore 64. Others are looking for big iron mainframes and front panel blinkenlights. Being of modern design, Andy Geppert’s Core64 technically doesn’t fit into either camp, but it does allow you to interactively play with what’s unquestionably one of the most fascinating components of the very first digital computers: core memory.

We’ve covered Core64 here on Hackaday in the past, and Andy even hosted a Retro Memory Hack Chat in 2021. But this is the first time I got the chance to see the hardware in person, and let me tell you, it’s awesome. The kits he brought along were long sold out by the time I got there, but he still had a couple demo units on hand for attendees to play with, and was happy to talk about the project with anyone who was interested. The device has several modes of operation, but the one that allows you to draw directly on the matrix by lighting up the LEDs behind each ferrite was especially popular with the younger crowd.

Its application as an educational tool was abundantly clear, but the Core64 isn’t just for the miniature hardware hackers in your life. There’s not a lot of opportunity to work with core memory these days, and even fewer to actually weave the stuff by hand, making this a particularly compelling gadget for anyone who wants to get some hands-on experience with one of the technologies that helped put man on the Moon.

Can You Hear Me Now?

At first glance, the Dial 1 for IT exhibit put together by Jason Perkins might seem somewhat out of place at a computer festival. While there was technically computer hardware involved, it was pushed off to the back, behind two tables that were stacked high with a wide array of telephones. The specimens on display ran the gamut from old rotary phones to relatively modern cordless models. There was even a payphone hung up on the wall next to the display, a particularly rare sight these days.

All of the phones were connected up to a PBX, and each had a little sticker indicating its extension. Attendees  were free to pick up whatever phone tickled their fancy and dial up one of its peers. There was even a public phone number listed so you could call into the system from your cell. This exhibit gave younger audiences a chance to get hands-on with technology that they likely have never seen in person before, and it was a huge hit. There was a certain novelty to seeing teenagers use a payphone in 2022, and it wasn’t lost on them — several times I saw younger visitors taking pictures of their friends using the payphone with, ironically, the pocket supercomputers that pass for phones in the 21st century.

For those who’ve never attended a VCF event, you might have the impression that the show floor looks like a computer museum — with rows of ancient machines arranged in tableau, far too old and fragile to power on, let alone actually use. In some special cases, you’d be right. But for the most part, VCF is as much about breathing new life into these classic machines as it is admiring them as historical artifacts. RoundUp!, a new game developed for the TRS-80 by Peter Cetinski is a perfect example. 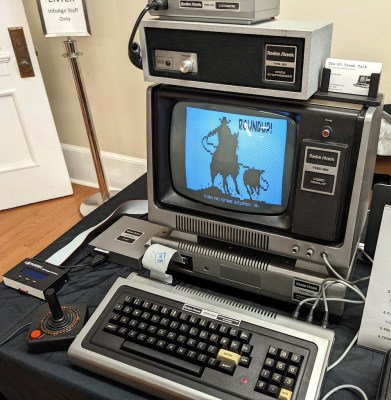 Of course, simply developing a game for the TRS-80 isn’t necessarily that notable of an accomplishment. After all there was no shortage of games cranked out by single developers back in the day, and you could argue that the majority of TRS-80 owners were probably adept enough at BASIC that they would have fiddled with their own simple games (or copied them out of a book) at some point.

The trick here is that Peter isn’t using a 1980s development workflow. Instead, his games are created on a Macbook Pro using modern development tools. The aptly named TRS-80 Screen Designer from Plaid Vest Software lets him create art assets using an interface that’s not entirely unlike the old grid paper worksheets. The zmac cross compiler lets you build binaries for the Tandy on your Windows, Linux, or Mac OS machine, and the trs80gp emulator lets you test them out. Slap the result on a stack of floppy disks (or cassette tapes, as the case may be), and you’ll be ready to get your own table at next year’s VCF.

No matter their age or background, everyone I spoke to at the 2022 Vintage Computer Festival had nothing but positive things to say about the event. At the end of the day even my own 11-year-old daughter, who usually spends her free time digging holes in Minecraft, was impressed. I’d say she came away from the event a bit wiser as well — there’s something about spending an afternoon toggling programs into the front panel of a minicomputer that makes the previously incomprehensible magic inside a modern smartphone seem quaint in comparison. She says she’s excited to go next year, and not just in the “Dad’s says I have to go” way, either.

Part of the appeal is no doubt the InfoAge campus itself, which offers an incredible array of exhibits for VCF visitors to explore. Seriously, were else is there a shipwreck museum in walking distance of an operational radio telescope? But even still, that the passionate members of the Vintage Computer Federation are able to craft an event that manages to enthrall guests that aren’t even half as old as the computers or equipment on display is frankly a minor miracle. Considering this year’s theme was “Computers for the masses”, I’d say they nailed it.