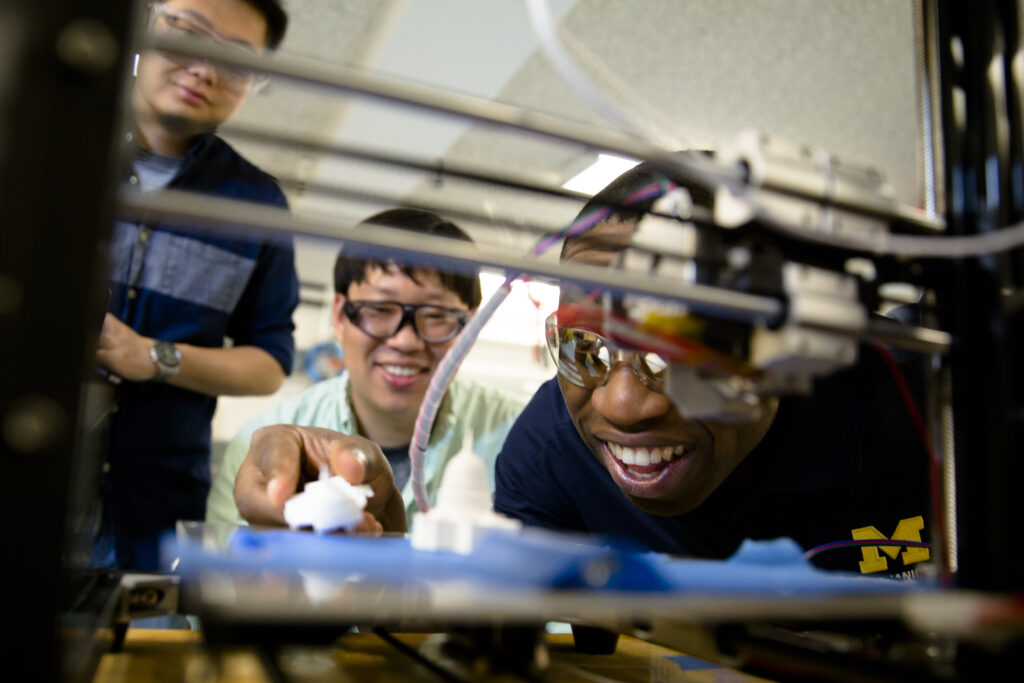 The program is designed to enable users to boost their print speeds by up to 100% without having to degrade part quality. It works by modifying a 3D printer’s firmware to compensate for real-world vibrations, and is compatible with any 3D printer that leverages a moving mechanical printhead.

“If you want to reduce vibration in a moving object, most times you can do that by slowing down. But as 3D printing is already very slow, that solution creates another problem,” said Chinedum Okwudire, an associate professor of mechanical engineering and founder of Ulendo. “Our solution allows you to print fast without sacrificing quality.”

Extrusion-based 3D printing has come a long way since the early days, but many of today’s desktop systems still need to run at relatively slow print speeds due to the vibrations generated by the moving components. If a machine is printing too fast, users run the risk of creating defects in parts.

Build to address the print speed problem, Ulendo FBS is based on a vibration compensation algorithm that works to mitigate the effects of a system’s troublesome vibrations. In essence, the software tool predicts when a 3D printer may be about to experience a vibration and dynamically adjusts the trajectory of the printhead to combat it. As such, printers running Ulendo FBS can safely increase their print speeds without worrying about ruining the surface quality of parts.

Okwudire adds, “Say you want a 3D printer to travel straight, but due to vibration, the motion travels upward. The FBS algorithm tricks the machine by telling it to follow a path downward, and when it tries to follow that path, it travels straight.”

The FBS stands for Filtered B Splines, which is the name of the mathematical function that the software uses to create the vibration compensation commands.

Okwudire first got the idea for vibration compensation software when he was working in the conventional manufacturing sector. He’d come across milling machines that were constantly vibrating, and couldn’t simply stiffen the machines’ frames to dampen the vibrations.

He started as a professor at the University of Michigan in 2011, where he finally had the time and resources to begin designing software specifically for combating machine vibrations. In 2017, one of the graduate students in his lab managed to implement his software on a 3D printing system.

Brenda Jones, CEO of Ulendo, said, “Members of the 3D printing industry have the same jaw-dropping reaction I had when I first heard about how this technology results in a printer operating at two times the speed and 10 times the acceleration.”

Eventually, Okwudire founded Ulendo to commercialize his technology and even received a $250,000 R&D grant from the National Science Foundation’s (NSF) America’s Seed Fund Program last year. Much of the company’s commercial development was also funded via an MTRAC grant from the Michigan Economic Development Corporation.

The Ulendo team is currently working on developing the FBS algorithm to be compatible with a wider range of machinery, including robots, machine tools, and other types of 3D printers. At RAPID + TCT, Okwudire also showcased his lab’s latest innovation – SmartScan. The software tool is capable of dynamically adjusting a laser beam’s trajectory around to prevent part warping during powder bed fusion 3D printing.

The latest in additive manufacturing software

Materialise also recently announced its new CO-AM open software platform, a comprehensive 3D printing process management tool for the industrial sector. The platform is aimed at high-volume manufacturers, and offers a cloud-based method of accessing a wide variety of software tools (including third-party ones) for planning, managing, and optimizing the 3D printing workflow.

Looking for a career in additive manufacturing? Visit 3D Printing Jobs for a selection of roles in the industry.

Featured image shows Chinedum Okwudire and students in his lab at the University of Michigan. Photo via Evan Dougherty.