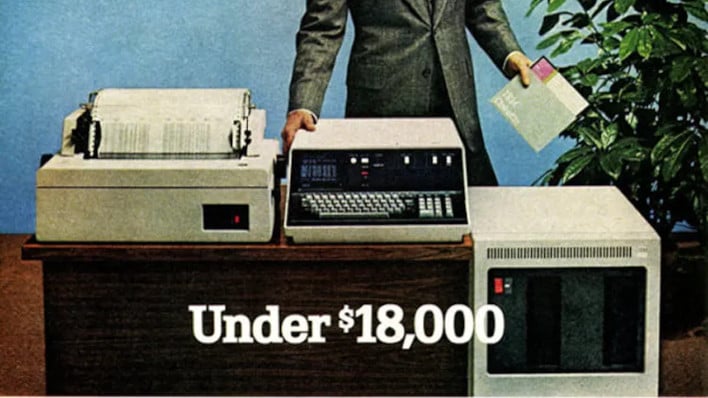 It’s always fun to take a walk down memory lane, especially the gold age in the advent of Personal Computing technologies. Some of the best ways to revisit this era are through print magazine ads that detail everything from the massive physical size of early hard disk drives, to the Apple II, and everything in between. Naturally, this has some of us a feeling nostalgic for the retro goodness of the good ol’ days of computing, when 14400 bps modems were cutting-edge networking gear.

Many of us here at HotHardware have owned, used or have had at least some experience with some of the earliest computer hardware. We also like to figure out how much old hardware would cost or how the requirements for some of today’s games and applications would translate to vintage hardware. For example, Call Of Duty Warzone would weigh over 2.7 tons in high density (1.44 MB) 3.5 inch floppy disks (144,157 disks x 18g average weight per disk)! And the same game would cost roughly $11.97M dollars to install across 598 of those $20,000 300MB hard disks. Check out our Discord if you’d like to have some fun participating in similar conversations.

While that $20K for a single hard disk seems extreme, this archive of advertising gives us a really interesting look into the computing history time capsule and how far we’ve come. From the early days when computers only existed in large datacenters, to now when most of us carry around a device with thousands of times more computing power than was used to put a man on the moon.

Returning back to that ultra-expensive 300MB hard drive for a moment, it’ll be obvious to anyone how both the physical size of those legacy had drives has been significantly reduced as has the cost per megabyte. That 300MB drive had platters about the size of a wall clock or frisbee in circumference and now we have microSD cards with thousands pf times the capacity.

What You See Is What You Get – Unfortunately, it’s in monochrome.

There is also what has to be one of the earliest references to an acronym that still in use today, What You See Is What You Get (WYSIWYG), along with a multitude of ads for many of the most popular, early home computers, like Apple’s $2,500 Macintosh or the much more budget friendly VIC 20 from Commodore at under $300.

Some of these photos advertisements are truly a trip down personal computing memory lane, and remind us of just how far we’ve come, quite literally from a two-bit, or byte rather, PC.