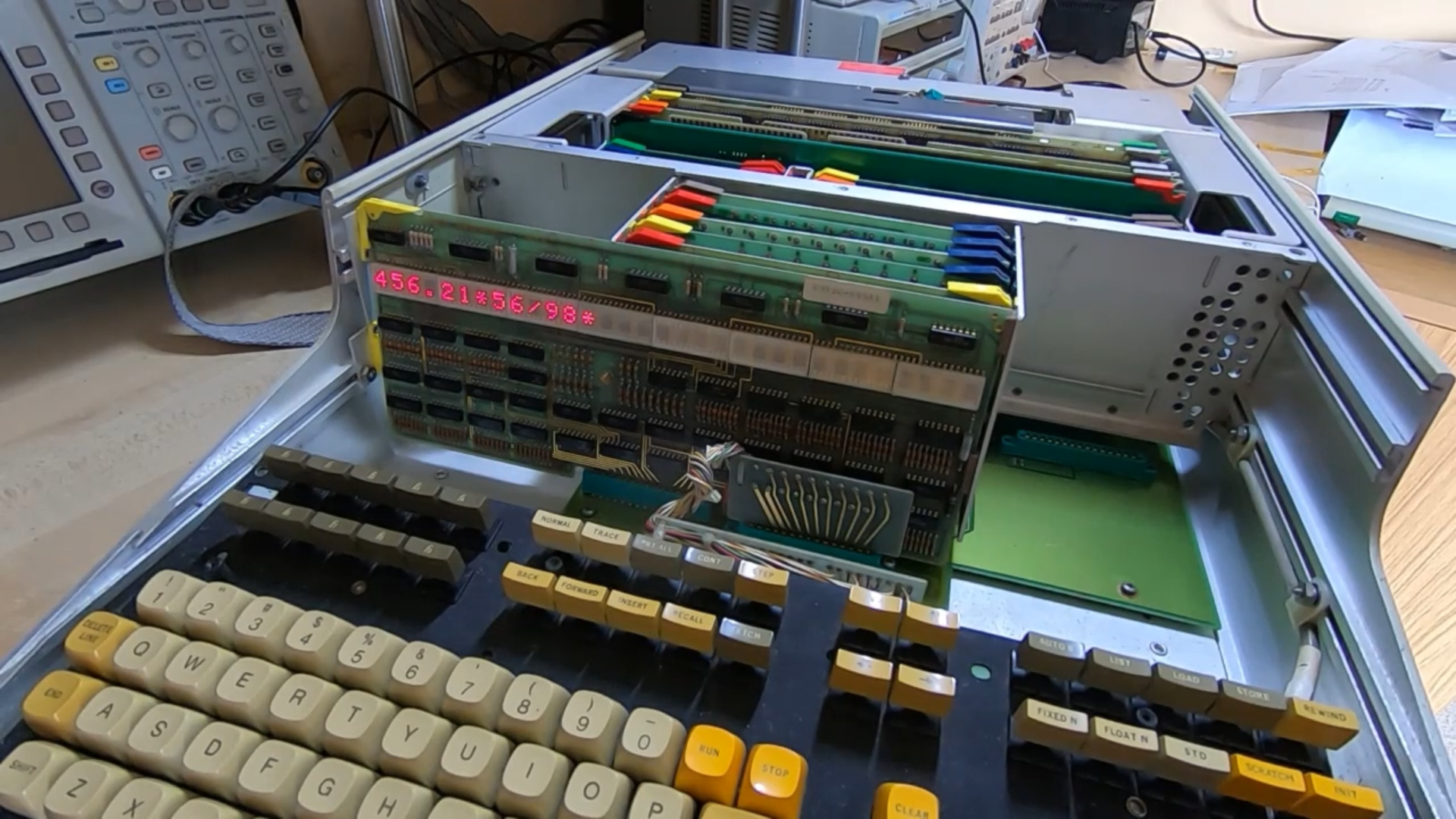 We love our retrocomputers here at Hackaday, and we’re always delighted to see someone rescue an historic artefact from the landfill. Sometimes, all it takes is replacing a broken power switch or leaky capacitor; other times you need to bring out the oscilloscope and dig deeper into internal circuitry. But the huge amount of work [Jerry Walker] put into bringing an HP 9830A back on its feet is something you don’t see very often.

If you’re not familiar with the HP 9830A, it’s a desktop computer from the early 1970s, fully built from discrete logic gates. The machine on [Jerry]’s desk turned out to be completely dead, with not even the fan spinning up. This was caused by a dodgy power switch, but replacing that switch was just the beginning: there were several bad components inside the power supply as well as a huge amount of moist dirt on the back of the motherboard. After a thorough cleaning and the replacement of several failed components, all four power rails were running within spec again.

Next came the complex task of debugging the four PCBs that together make up the CPU. [Jerry] hooked up his logic analyzer to these boards to visualize the CPU’s internal state as it stepped through its microcode. Again, several TTL chips turned out to be broken and needed replacement. With the CPU working, it was time to get to the main program ROM, which ended up consuming much of [Jerry]’s repair time.

The problem with broken ROM chips is not so much finding a replacement, but getting a correct copy of their contents. Luckily, a cycle-accurate HP 9830a emulator exists which contains copies of the entire firmware. With several of the dozens of ROM chips dodgy or dead, repairing the original ROM board was not a realistic proposition, so [Jerry] designed a complete replacement board instead. With a modern, reprogrammable EPROM chip and some glue logic it was also a huge help in the rest of the repair process, as it allowed him to run custom machine code on the computer.

With a few test routines written into the EPROM [Jerry] was able to test all the RAM, ROM and registers as well as the display, and found yet more broken chips to be replaced and faulty connections to be repaired. With all the main functions now working, the HP 9830A came to life and responded to commands again. The only remaining issue was in the tape drive, which turned out to be caused by a broken sensor. Once that was replaced, the repair process was finally complete.

[Jerry]’s running commentary on his 26-part video series gives lots of great insights into the intricacies of computer architecture, so if you’re looking for something to binge watch, forget Netflix and put on [Jerry]’s videos instead. They also show the importance of a systematic troubleshooting method: start with the most bare-bones system possible, verify that it works exactly as intended, and only then start adding other components.

If you can’t get enough of vintage HP gear repairs, check out this repair of the related HP 9825. The ongoing process of restoring a Centurion Minicomputer is also definitely worth following.

Thanks for the tip, [mgsouth]!