The Pandemic Has Benefited One Group Of People: Billionaires

Other than Netflix, Andrew Cuomo and the virus itself, no one has benefited from the COVID-19 pandemic more than American billionaires.

Over the last six months, roughly 3 out of 4 members of America’s 10-digit-wealth club have seen a rise in their net worths. Sixteen American billionaires are worth at least twice as much now as they were in March. And Jeff Bezos, who was already worth $113 billion at the start of 2020, is heading into the year’s final stretch $73 billion richer.

Michael Bloomberg and Charles Koch are both up by $7 billion, and Mark Zuckerberg has added another $46 billion to his already staggering $54 billion in wealth. Elon Musk found time between COVID truther tweets and CPAP machine donations to take his fortune from $25 billion to $92 billion.

Some billionaires have gotten richer as a direct result of the pandemic. Amazon, for example, was one of the few companies in the United States to expand as consumers locked down at home and avoided brick-and-mortar retail. Facebook, Google, Tesla and Microsoft have also boomed in the past six months, adding to the fortunes of their respective billionaire founders.

Most billionaires, however, have grown their wealth not as business leaders but as investors. One of the ongoing mysteries of the COVID-19 recession is why it has — so far at least — barely touched the stock market. After falling roughly 35% in February, both the Dow Jones and the S&P 500 returned to pre-pandemic levels in just 126 trading days, a turnaround that

Space internet is ready for people to start using it, Elon Musk says

SpaceX CEO Elon Musk has said his space internet project is ready for public use following the latest launch of Starlink satellites.

© Provided by The Independent

SpaceX delivered a further 60 satellites into low-Earth orbit this week, bringing the total number close to 800.

The private space firm hopes to eventually launch tens of thousands of Starlink satellites to create a constellation capable of beaming high-speed broadband down to 99 per cent of the inhabited world.

“Once these satellites reach their target position, we will be able to roll out a fairly wide public beta in northern US and hopefully southern Canada,” Musk tweeted following the launch.

“Other countries to follow as soon as we receive regulatory approval.”

The Starlink network has already been tested on a limited scale, providing internet to emergency responders in the US following recent wildfires.

The Washington Emergency Management division was able to set up a Starlink-powered WiFi hotspot for residents in Malden last month after 80 per cent of the town was destroyed by fire.

Musk said at the time that SpaceX was prioritising emergency services and locations with no internet connectivity at all.

© Provided by The Independent
A satellite dish receives signal from the Starlink internet network in Malden, WashingtonWashington Emergency Management Division


In April, the billionaire entrepreneur said that 800 satellites would be enough for “significant” global coverage, though speeds will be nowhere near the 100 megabits per second speed promised by SpaceX until the network grows.

“With performance that far surpasses that of traditional satellite internet, and a global network unbounded by ground infrastructure limitations, Starlink will deliver high-speed broadband internet to locations where access has been unreliable, expensive, or completely unavailable,” Starlink’s website states.

Love autumn? This website is looking to pay 3 people to test out fall candles

If you love autumn, this may be your dream job.

The three people chosen will receive $250, a cozy blanket, an assortment of candles based on their preferences, and a $50 Starbucks gift card for all the pumpkin spice lattes they want.

The website says you’re the perfect fit if you love candles, are obsessed with fall, have strong opinions, can receive deliveries of multiple packages, are over 18 years old and are a U.S. resident.

“At Wishlisted, our goal is to provide people with the best resources to help them make the most of this fall season,” said Dayne Ford, Founder and CEO of Wishlisted.com. “And since this year will be a bit different from years past, given the effects of COVID-19, we want to give people the joyful feeling of fall from the comfort of their own homes. This contest allows three lucky winners to earn money simply by smelling candles – they will tell us what they think is best and we will turn that into content that all of our readers can enjoy.”

If you’re interested in this unique job, you can apply here by submitting your information and explaining why you’re the perfect person to take on the task.

LinkedIn has released its annual ranking of the hottest startups to work for.

The list is based on how half a billion LinkedIn users interact with startups on the site across four areas: user engagement with the company and its employees, employee growth, job applications started on LinkedIn, and how often people working for firms on LinkedIn’s top companies list — a different list of firms with over 500 employees — move over to these startups.

Business Insider got exclusive data from LinkedIn on its top-ranked startups across six European countries — the United Kingdom, France, Germany, Spain, Italy, and the Netherlands.

To be eligible for the list, companies had to be founded in the last seven years, privately held, and headquartered in the country on whose list they appear. The firms had to have a minimum of 50 employees — so the list excludes some smaller startups.

Scroll down to see the list of the top 30 startups across Europe. We’ve ranked the top five from each of the six European countries below.

Arrival is the top startup in the UK

Founded in 2015, Oxford-based startup Arrival is working on prototypes for electric vehicles including buses and delivery vans.

Arrival’s position in the ranking reflects the rise of electric vehicle sales in Europe in the first quarter of 2020. According to the latest McKinsey report, the number

Facebook says it has deployed a feature in its Community Help hub to make it easier for users to assist each other during the pandemic. As of this week, AI will detect when a public post on News Feed is about needing or offering help and will surface a suggestion to share it on Community Help. Once a post is moved or published directly to the hub, an algorithm will recommend matches between people.

Building this Community Help feature, which Facebook says is available in all countries in English and 17 other languages, involved a difficult engineering challenge because the system needs to make recommendations even when semantic structures in posts are very different. (For example, consider “Does anyone have masks for kids?” and “We can donate face coverings of any size.”) The feature also needs to go beyond existing candidate-matching logic to incorporate general statements like “I can lend a hand to anyone!” 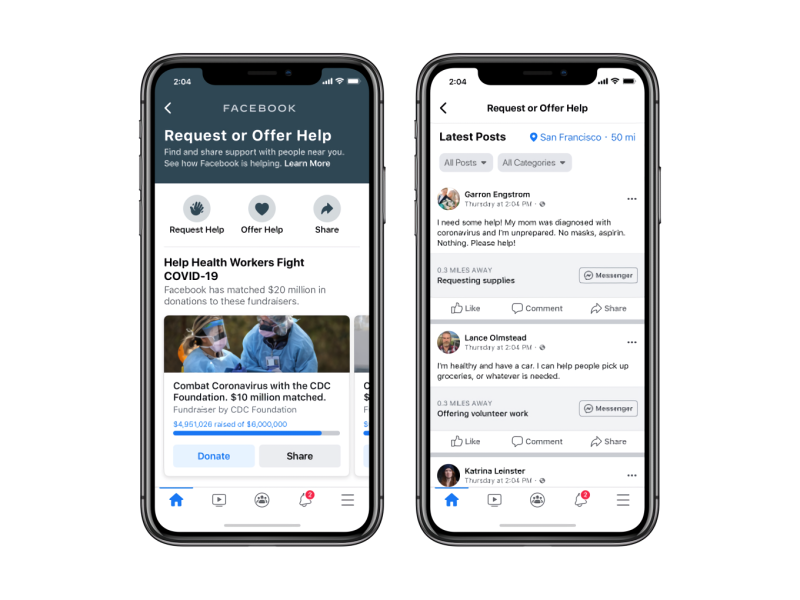 Facebook says it built and deployed the matching algorithm using XLM-R, its natural language understanding model that produces a score ranking how closely a request for help matches offers in a community. XLM-R, which has 550 million parameters (variables internal to the model that fine-tune its predictions), was trained on 2.5 terabytes of webpages and can perform translations among roughly a hundred different human languages.

The system integrates posts’ score into a set of models trained on PyText, an open source framework for natural language processing. People needing or offering help receive matches through an overlay that suggests