It is no longer a surprise to industry observers that partial reusability, economies of scale and vertical integration have enabled SpaceX to achieve extremely low Falcon 9 launch costs, nor is it a surprise that SpaceX’s launch and satellite connectivity businesses are inherently linked, as the company takes advantage of its industry-low launch costs to orbit its own broadband constellation for a fraction of the competition’s launch capital expenditure.

It may however remain a surprise to some that Starlink is also linked to SpaceX’s Smallsat Rideshare program, revealed August 2019, and that SpaceX will further reduce the Starlink launch capex by manifesting paying customers as rideshare payloads on some Starlink launches. In doing so, it may even break even or make a profit on such Starlink rideshare missions, on the condition that it identifies and contracts enough rideshare customers to offset the cost of a launch.

It is likely that SpaceX is capable of achieving an approximately $30 million launch cost after a single reuse, and that it is capable of much lower costs for Starlink with subsequent reflights, especially with previously-flown fairings. SpaceX has flown the same booster up to six times, as demonstrated with an Aug. 18 Starlink mission. In early 2020, SpaceX Director of Vehicle Integration Christopher Couluris, mentioned “[the rocket] costs $28 million to launch it, and that’s with everything” and that reuse is what “is bringing the cost down.” 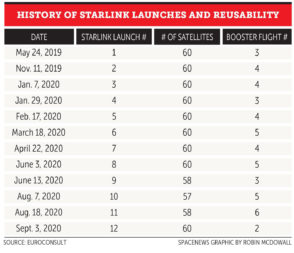 However, why would SpaceX show all their cards and offer lower launch prices as they already are the lowest bidder on the market in terms of specific price ($/kg) to all orbits? As the lowest bidder, SpaceX has no incentive to further reduce launch prices and it is only logical that it seeks to profit from this cost/margin advantage. Let