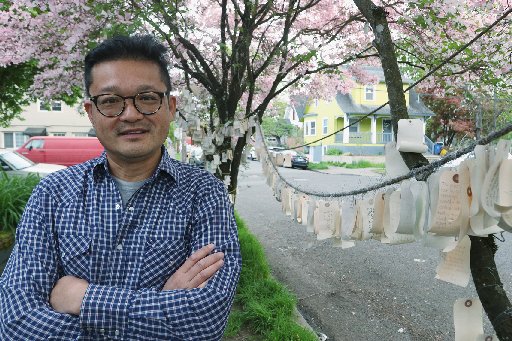 PORTLAND, Oregon — All Douglas Tsoi wants is an economy that runs according to the law of divine grace.

Last year in Portland, Tsoi launched what he calls the Reparations Underground Market. It’s a kind of Craigslist website on which every dollar spent goes to repairing financial damage wrought by slavery, colonialism or racism.

Here’s how it works: Vendors sign on to offer professional services and buyers pay for them. The buyer selects one reparation organization from a drop-down list and half the money goes there. The vendor chooses where the other half goes. The buyer gets a service and all the funds go to reestablishing justice. The market is meant to be self-sustaining.

“We’re participating in God’s economy, where money flows so everyone’s needs are met, our kinship is recognized, and our enough-ness in grace is celebrated,” said Tsoi, who is just about to graduate from a spiritual director program at the Franciscan Spiritual Center in Lake Oswego, Oregon.

The website offers seven organizations from which to choose, all of which aim to support groups who have been on the peripheries. They include a group that helps Black families buy houses and another that helps local Indigenous peoples retain connections to their culture and land. Another organization aids Black farmers.

“Prosperity is really about sharing, collaboration and generosity,” Tsoi told the Catholic Sentinel, Portland’s archdiocesan newspaper. “There is no way to create a more inclusive society without creating a more inclusive economy.”

Born in Canada, Tsoi grew up in California. He has been a lawyer, schoolteacher and entrepreneur. Tsoi, 49, lived so frugally that he had enough money to retire seven years ago. He still spends only about $25,000 per year and lives in a two-bedroom house.

He felt called to devote his life to spiritual endeavors and making the world a more just place.

“God is asking us to participate in grace,” said Tsoi. “Money should serve the community, not the reverse. At some point when you have enough, you want others to have enough. Having more is not going to make me happy.”

Tsoi has been inspired by Franciscan writings and the example of St. Francis of Assisi himself.

Tsoi knows from the words of Jesus that action is involved in salvation. “Jesus asks, ‘Did you feed me? Did you give me a drink?’” Tsoi said.

Tsoi is full of ideas. In 2020, he created the Jubilee Fund, in which donors gave money to eliminate credit card debt of neighbors. Those relieved debtors paid back the principal at 0% interest, with the money going into reparations for mistreated peoples.

“In essence, we turned debt into donations, debtors into donors,” said Tsoi. “It’s a way for people to create and participate in a community of grace.”

The notion started when Tsoi paid off a friend’s $22,000 credit card debt. The friend and his wife agreed to pay Tsoi back at no interest, $400 a month for five years. Tsoi began donating the monthly payment to reparations. His money did two good deeds.

Tsoi hopes a larger institution is inspired by the idea and picks it up.

“Douglas Tsoi’s casual, kindly demeanor did not at first suggest that he had been meditating, experimenting and sharing insights for most of his life about the mysterious relationship between spirituality and financial survival,” said Lorie Simmons, a member of Holy Cross Parish in Portland and a fellow student of Tsoi’s in spiritual direction at the Franciscan Spiritual Center.

“He seemed a gentle and friendly guy who wanted to get people together and foster community within our cohort of the spiritual direction training program,” she said. “But if you’re interested, you eventually learn that he has been working on creative solutions to some of the toughest problems of human existence, letting the Spirit work through him in profound ways.”

Langlois is managing editor of the Catholic Sentinel, newspaper of the Archdiocese of Portland.