After five months in beta, the GitHub Code Scanning security feature has been made generally available to all users: for free for public repositories, as a paid option for private ones. 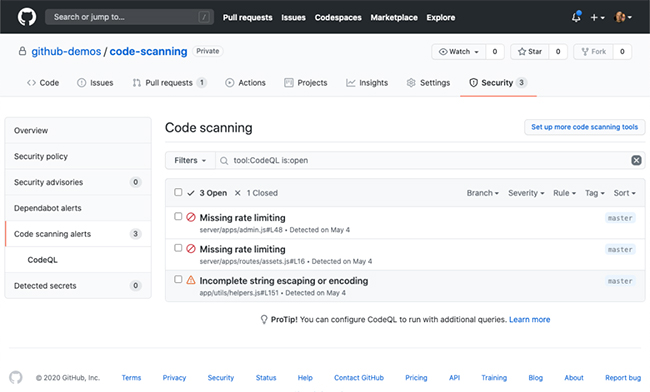 “So much of the world’s development happens on GitHub that security is not just an opportunity for us, but our responsibility. To secure software at scale, we need to make a base-level impact that can drive the most change; and that starts with the code,” Grey Baker, GitHub’s Senior Director of Product Management, told Help Net Security.

“Everything we’ve built previously was about responding to security incidents (dependency scanning, secret scanning, Dependabot) — reacting in real time, quickly. Our future state is about fundamentally preventing vulnerabilities from ever happening, by moving security core into the developer workflow.”

The Code Scanning feature is powered by CodeQL, a powerful static analysis engine built by Semmle, which was acquired by GitHub in September 2019.

The engine can analyze code written in C, C++, C#, Java, JavaScript, TypeScript, Python and Go, but since the Code Scanning feature built on the open SARIF standard, it can also work with third-party analysis engines available from the GitHub Marketplace.

“We want developers to be able to use their tools of choice, for any of their projects on GitHub, all within the native GitHub experience they love. We’ve partnered with more than a dozen open source and commercial security vendors to date and we’ll continue to integrate code scanning with other third-party vendors through GitHub Actions and Apps,” Baker noted.

Among the third parties that offer automated security scans via GitHub Actions are Checkmarx and DefenseCode.

“The major value add here is that developers can work, and stay within, the code development ecosystem in which they’re most accustomed to while using their preferred scanning tools,” explained James Brotsos, Senior Solutions Engineer at Checkmarx.

“GitHub is an immensely popular resource for developers, so having something that ensures the security of code without hindering agility is critical. Our ability to automate SAST and SCA scans directly within GitHub repos simplifies workflows and removes tedious steps for the development cycle that can traditionally stand in the way of achieving DevSecOps.”

“This is all done in an automated fashion, so as soon as a pull request takes place, a scan is triggered, and results are embedded directly into GitHub. Together, these integrations paint a holistic picture of the entire application’s security posture to ensure all potential gaps are accounted for,” Brotsos added.

Leon Juranic, CTO at DefenseCode, said that they are very excited by this initiative, as it provides access to security analysis to over 50+ million Github users.

“Having the security analysis results displayed as code scanning alerts in GitHub provides an convenient way to triage and prioritize fixes, a process that could be cumbersome usually requiring scrolling through many pages of exported reports, going back and forth between your code and the reported results, or reviewing them in dashboards provided by the security tool. The ease of use now means you can initiate scans, view, fix, and close alerts for potential vulnerabilities in your project’s code in an environment that is already familiar and where most of your other workflows are done,” he noted.

A week ago, GitHub also announced additional support for container scanning and standards and configuration scanning for infrastructure as code, with integration by 42Crunch, Accurics, Bridgecrew, Snyk, Aqua Security, and Anchore.

The benefits and future plans

“We expect code scanning to prevent thousands of vulnerabilities from ever existing, by catching them at code review time. We envisage a world with fewer software vulnerabilities because security review is an automated part of the developer workflow,” Baker explained.

“During the code scanning beta, developers fixed 72% of the security errors found by CodeQL and reported in the code scanning pull request experience. Achieving such a high fix rate is the result of years of research, as well as an integration that makes it easy to understand each result.”

Over 12,000 repositories tried code scanning during the beta, and another 7,000 have enabled it since it became generally available, he says, and the reception has been really positive, with many highlighting valuable security finds.

“We’ll continue to iterate and focus on feedback from the community, including around access control and permissions, which are of high priority to our users,” he concluded.