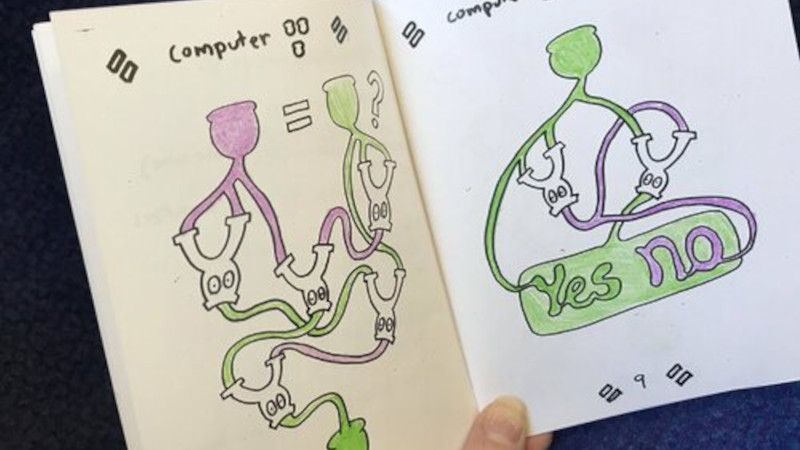 While Radio Shack did have the Color Computer, we don’t think they had this in mind. [Pepepépepe] has some coloring book pages and simple rules that let you simulate logic circuits using a crayon. The downloadable ‘zine has hand-written instructions and several examples.

Keep in mind, this is a computer in the same way the old logic kits in the 1960s were computers. They are really demonstrations of digital logic circuits. To work the “computers”, you pick two colors, one for a square and the other for a circle. You color pathways until you reach a “nory.” The nory, which looks suspiciously like a slingshot with eyes, has a special rule. If both branches of the nory have your circle color on them, the output of the nory will be the square color. Otherwise, the color coming out is the circle color.

Obviously, this rule generates a NOR gate where the circle color is a zero and the square color is a one. Since the colors propagate down the paths, you can draw display elements including 7-segment displays and make them work.

There are a few more rules to learn and you can build a computer that even has a game pad. No kidding. Is this practical? Of course not. But it might be a fun introduction to digital logic for a smart kid, and who knows where that will lead?

It would be fun to recreate some of the old Geniac “computers” like this. If you like paper computers, there’s CARDIAC (you can even simulate that paper computer on an FPGA).