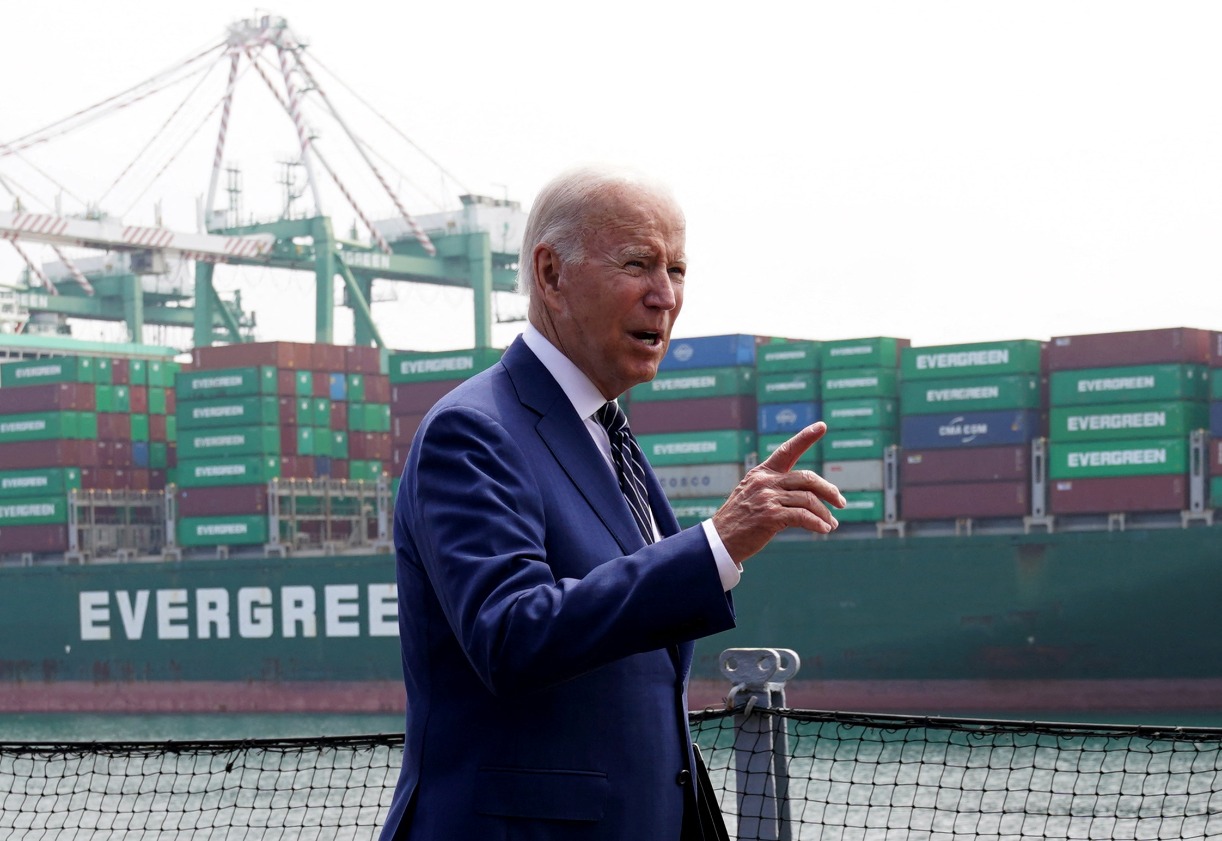 The shortage in microelectronics is increasing prices in addition to stunting economic growth in the United States. Inflation has reached a forty-year high as a result of pandemic-driven distortions in demand and disruptions in supply chains for key inputs like semiconductors. Treasury Secretary Janet Yelled estimated this week that “a third of U.S. inflation is new and used cars and … it is all due to a shortage of semiconductors.”

U.S. foreign policy is making the chip shortage worse, thereby fueling inflation. The Biden administration has sanctioned more than twenty major Chinese chip companies, opting to lengthen and expand Trump’s trade war. This has helped reduce China’s production of semiconductors: in 2021, China’s share of the global semiconductor market fell for only the second time this century. Restricting the growth of China’s semiconductor industry is the single best way to reduce the number of semiconductors that are produced as China assembles more chips than any other country.

The economic costs of this hawkish stance toward China are significantly greater than its illusory geopolitical benefits. Brian Deese, the director of President Joe Biden’s National Economic Council, made a startling admission in April: “The best estimates are the lack of available semiconductors probably took a full percentage point off of [U.S.] GDP in 2021.” The United States and Taiwan control key chokepoints in the global semiconductor supply chain, meaning that China’s chip industry poses few national security risks to the United States. Biden should reverse America’s counterproductive offensive against Chinese chips not only to slow inflation but also to moderate America’s worsening economic war with China.

Semiconductors are an essential component of various technologies, ranging from scannable credit cards to intercontinental ballistic missiles. The pandemic simultaneously caused a surge in demand for semiconductors, since consumers suddenly began buying electronics again. However, after the initial coronavirus wave waned, a rupture in supply chains due to shutdowns at plants and ports ensued. Consequently, U.S. companies have only a five-day excess supply of chips, down from a forty-day surplus before the pandemic.

The semiconductor shortage has been one of the core drivers of inflation in the United States. According to an analysis of over 200 American manufacturing sectors by the St. Louis Fed, prices in sectors that rely on chips were six percentage points higher than in other manufacturing sectors. The chip shortage also caused carmakers to produce 7 million fewer cars in 2021, driving up U.S. prices for new cars by 8 percent and used cars by 40 percent.

U.S. restrictions on Chinese chipmakers have contributed significantly to the domestic chip shortage. President Donald Trump’s curbs on Chinese producers, which Biden has intensified, cut U.S. imports of Chinese chips in half. Biden has banned many Chinese firms from using U.S. equipment to manufacture chips, blocked companies that contract with U.S. entities from working with Chinese companies, and barred U.S. investment in Chinese companies including its largest chipmaker, SMIC. Setbacks for Chinese semiconductor companies have led other chipmakers to overutilize their factories to maximize production, neglecting the need to perform maintenance on equipment and heightening the risk of further supply disruptions.

Biden’s bellicose policy is only escalating. Commerce Secretary Gina Raimondo recently threatened to “shut SMIC down” by “prevent[ing] them from using our equipment and our software” if SMIC violates sanctions on Russia. This threat is only a few steps removed from proposing full-scale economic warfare; it would be as if Liu He, China’s top economic policymaker, said China would bankrupt Apple by shuttering its factories unless Washington forced Apple to stop selling iPhones to Taiwanese customers. The Biden administration is also considering enacting crushing new sanctions on top Chinese chipmakers such as Hua Hong Semiconductor, Yangtze Memory Technologies, and ChangXin Memory Technologies.

American animosity towards Chinese semiconductor companies has sparked panic in various industries, causing companies to deepen the chip shortage by placing massive orders to grow their stockpiles. According C.C. Wei, the CEO of the world’s largest semiconductor producer, Taiwan Semiconductor Manufacturing Company (TSMC), “geopolitical tensions” and the pandemic have caused multinationals to rush to hoard chips. Within China, firms that are worried about being blacklisted often stockpile U.S. chips and chipmaking equipment in anticipation of future sanctions.

U.S. policymakers claim that these supply disruptions are necessary to hinder China’s technological development. Biden has stated that “China is doing everything it can to take over the global [semiconductor] market so they can try to outcompete the rest of us and have a lot of applications—including military applications.” U.S. sanctions have been successful in slowing China’s semiconductor production: only 16 percent of Chinese demand for semiconductors is met domestically, well below China’s 2020 target of 40 percent self-sufficiency.

However, even without U.S. sanctions, China would be nowhere near dominating the global semiconductor market. U.S. companies design three-quarters of all semiconductors and control the software necessary to do so; TSMC manufactures over 90 percent of advanced semiconductors; and Dutch firm ASML has a near-monopoly on the advanced lithography machines required to etch circuits into chips. Chinese chips are currently two generations behind the cutting-edge chips made by TSMC and Samsung, and both Taiwan and South Korea are taking additional steps to prevent Chinese intellectual property theft.

China’s shortage of semiconductor talent has doubled in recent years to 300,000 skilled workers, even though the industry employs only 540,000 people. Wang Jisi, one of China’s top international relations experts, wrote in February 2022 that China has “hit a bottleneck” when it comes to advanced technologies such as semiconductors, and will not catch up to the United States anytime soon. Wang’s report was quickly deleted from the internet following backlash from the Chinese government.

The Biden administration has ignored this evidence, insisting that subsidies are needed to help U.S. semiconductor companies beat China. The administration’s top legislative priority with respect to China is the U.S. Innovation and Competition Act, which would funnel $50 billion in subsidies to U.S. semiconductor firms that have offshored production in recent decades. All signs indicate that the legislation is poised to fall flat. The bill does not prohibit firms from spending subsidies on stock buybacks rather than new factories, even though Intel, Qualcomm, Texas Instruments and other companies have spent 70 percent of their profits on buybacks over the last decade. U.S. semiconductor companies might exploit another loophole to waste subsidies by shipping expensive equipment outside of the U.S. to justify spending subsidies to rebuild the same machines. Separately, the U.S. Innovation and Competition Act leaves America’s Kafkaesque permitting process intact. As a result of the glacial permitting process for semiconductor factories, Georgetown’s Center for Security and Emerging Technology finds that “the United States currently builds fewer fabs at a slower rate than the rest of the world.”

A more effective approach would be to reduce inflation by lifting some sanctions on Chinese chipmakers. Even if the $50 billion included in the proposed legislation was immediately spent to build new factories in the U.S., it would do nothing to alleviate the current shortage because it would be three years before the new factories began producing chips. The best way to immediately increase semiconductor production and curb inflation is to loosen restrictions on Chinese firms that have excess manufacturing capacity.

Reducing the temperature of the trade war would have geopolitical benefits as well. For one, lifting some semiconductor sanctions makes it less likely that China will lash out with severe countermeasures. In 2010, China temporarily blocked all exports of rare earth minerals to Japan after the captain of a Chinese fishing vessel was detained for fishing in Japanese waters. If China were to use its 85 percent of the world’s refined rare earth minerals as leverage against the United States, Washington would be hard-pressed to find an alternative supplier for the key ingredients in lithium-ion batteries.

Biden could also use sanctions on semiconductor firms as a bargaining chip to jumpstart talks on more important technology issues, such as constraining autonomous weapons. China has already come to the negotiating table by proposing an international ban on the use of autonomous weapons. The U.S. has a strong incentive to do the same, as China has a significant chance of winning an arms race given its advantages over the U.S. in robotics and facial recognition.

Policymakers need to get used to the fact that China is now the world’s largest economy—U.S. efforts to harm Chinese firms will also damage the United States. A less confrontational approach toward Chinese chipmakers would reduce inflation and stem the escalatory spiral of economic warfare between the U.S. and China. If Biden is serious when he says that inflation is “the number-one challenge facing families today” and his “top domestic priority” then his administration should stop making inflation worse.